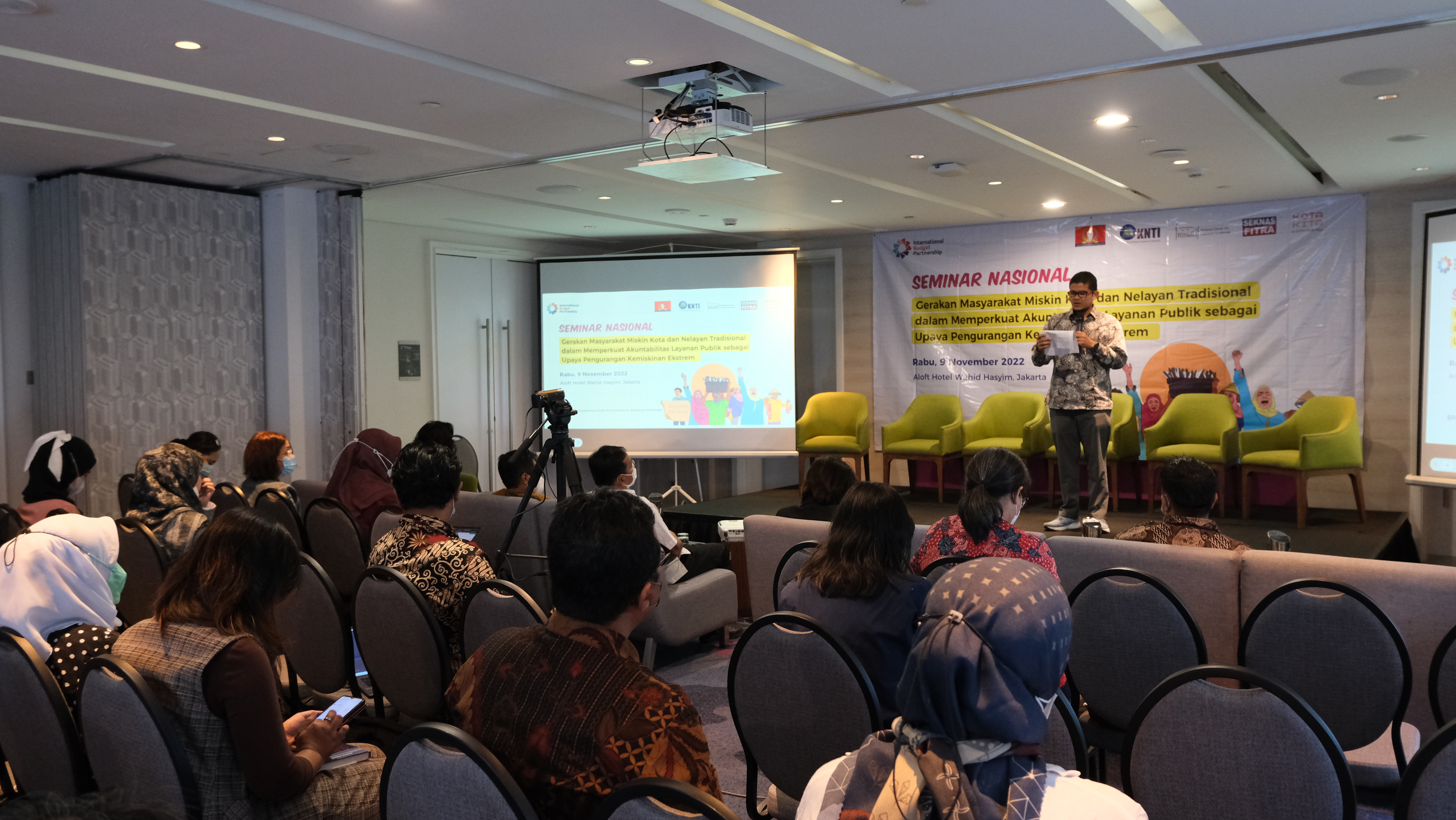 With support from International Budget Partnership Indonesia, Kota Kita and partners were excited to host the dissemination of results and learnings from the SPARK (Strengthening Public Accountability for Result and Knowledge) program in Indonesia at a joint national seminar in Jakarta on 9 November 2022, which highlighted the critical role of grassroots movements — the Indonesian People's Struggle Union (SPRI) and the Indonesian Traditional Fishermen Association (KNTI) — in advocating improved service delivery and accountable fiscal governance for the urban poor and fishermen communities in Indonesia.

"Indonesia's democracy provides a space for civil society to participate in monitoring development to align with constitutional mandates…This includes ensuring (that) the allocation and mobilization of the national budget are managed with accountability and openness," said Vice President of the Republic of Indonesia K.H. Ma'ruf Amin in a recorded statement that opened the national seminar on 9 November 2022 in Jakarta. "In this opportunity, I would like to express my appreciation for this initiative and for the steps that have been implemented by the partners of this coalition of civil society groups that represent the urban poor as well as small or traditional fishermen."

The SPARK program is an initiative led by the International Budget Partnership, which seeks to increase the capacity of grassroots communities to engage with the fiscal governance system to advocate for the betterment of public policies and services that impact their lives. The model has been implemented in six other countries (Ghana, India, Kenya, Nigeria, Senegal, and South Africa), supported by multiple donors; Open Society, Gates Foundation, and the United Kingdom's Department for International Development (DFID).

In Indonesia, the program has been working closely with SPRI and KNTI since 2020 to increase their capacity to advocate for two critical public service issues, social protection through Indonesia's Family Hope Program (PKH) and subsidized fuel for traditional fishermen, respectively. The capacity-building support is intended to strengthen the movements to collectively engage with the fiscal governance system — the politics, institutions, policies, and processes — that govern the government's use of public finances for public services. The SPARK program in Indonesia also engages civil society partners Seknas FITRA, Perkumpulan Inisiatif, and Kota Kita, thus creating a civil society coalition with diverse strengths and expertise ranging from budgeting to citizen participation.

Three years after its implementation, the SPARK program has documented notable achievements in improving the capacity of grassroots movements at the organizational level while contributing to policy change at the national and regional levels through enhancing civil society coalition processes and engagements with the national government. In the national seminar titled "The Movement of Urban Poor and Traditional Fishermen in Strengthening Public Service Accountability as an Effort for Reducing Extreme Poverty" on 9 November 2022, representatives from SPRI and KNTI proudly shared their achievements with a room of government officials, academia, civil society organizations, and other grassroots movements.

During the national seminar, Dika Moehammad, National Secretary of SPRI, shared that the organization carried out four key strategies during the SPARK program: forming the Coalition of Social Security Reform with SPRI, IBP Indonesia, Seknas FITRA, Perkumpulan Inisiatif, Kota Kita and the Indonesian People's Movement Confederation (KPRI); capacity building through various skill training; social audit; and advocacy campaigns such as public seminars and community events. According to Dika, one of the most notable achievements is how the capacity-building efforts from the SPARK program empowered SPRI members, primarily mothers, to become active community organizers. "Through the SPARK program, all citizens, particularly mothers who previously only knew about domestic work, now understand the mechanisms behind regional and state budgets…and are more empowered to take action," Dika said. 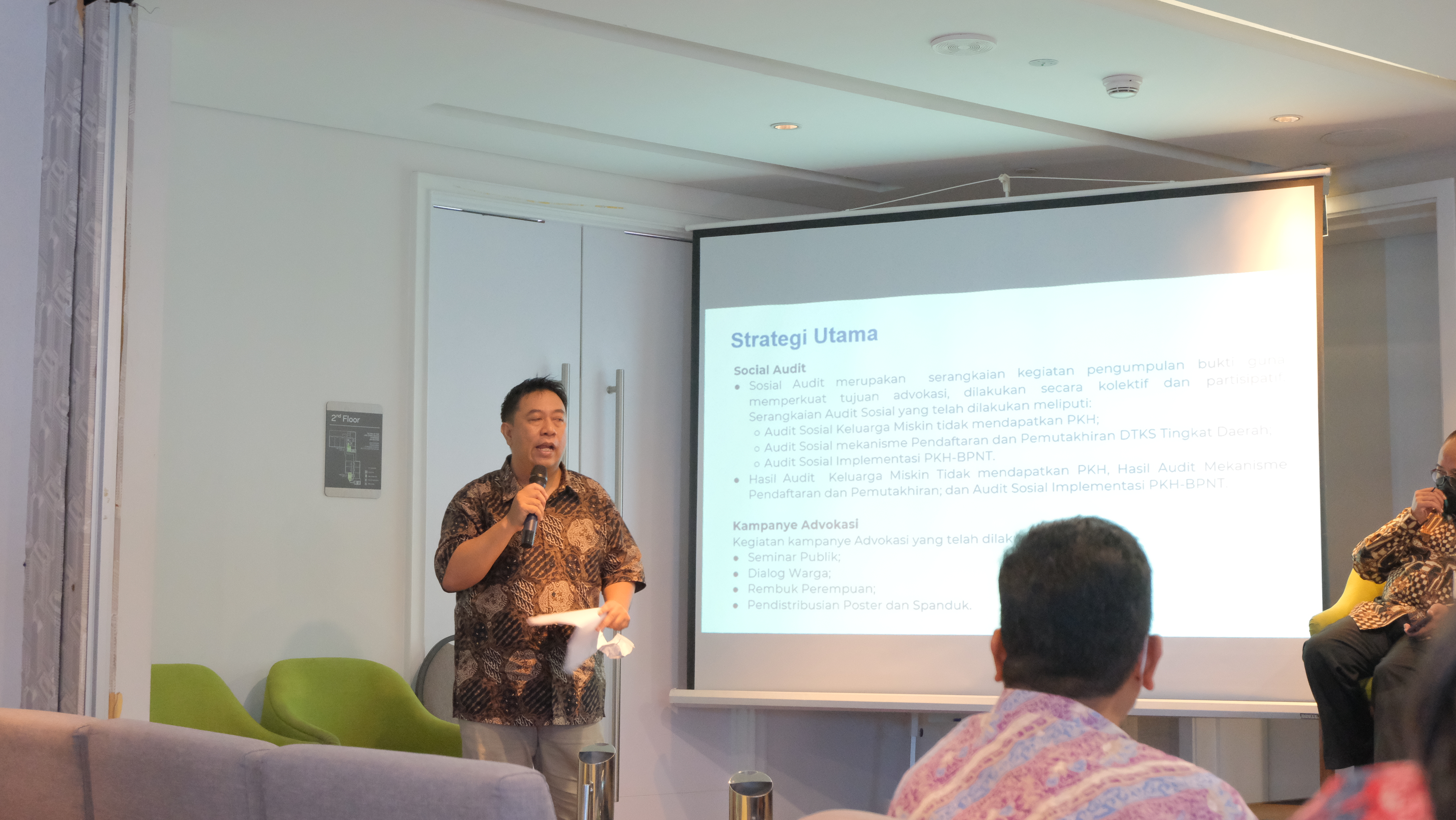 Meanwhile, KNTI also implemented four key strategies during the SPARK program: forming the KUSUKA coalition with support from IBP Indonesia and technical support from Seknas FITRA and Inisiatif; capacity building of members; participatory mapping of fishermen and fishery business in five SPRI working areas; and advocacy campaign efforts. At the national seminar, Dani Setiawan, Chairman of KNTI, said that these strategies had bolstered the organization's efforts to advocate for more targeted service delivery of government aid and their involvement in local budget planning processes. "For decades, fishers have struggled to access subsidized fuel," Dani said. "With the SPARK program, we (KNTI) have built a solid position to advocate and have dialogues with the local and national government, bolstered by robust data-based evidence." 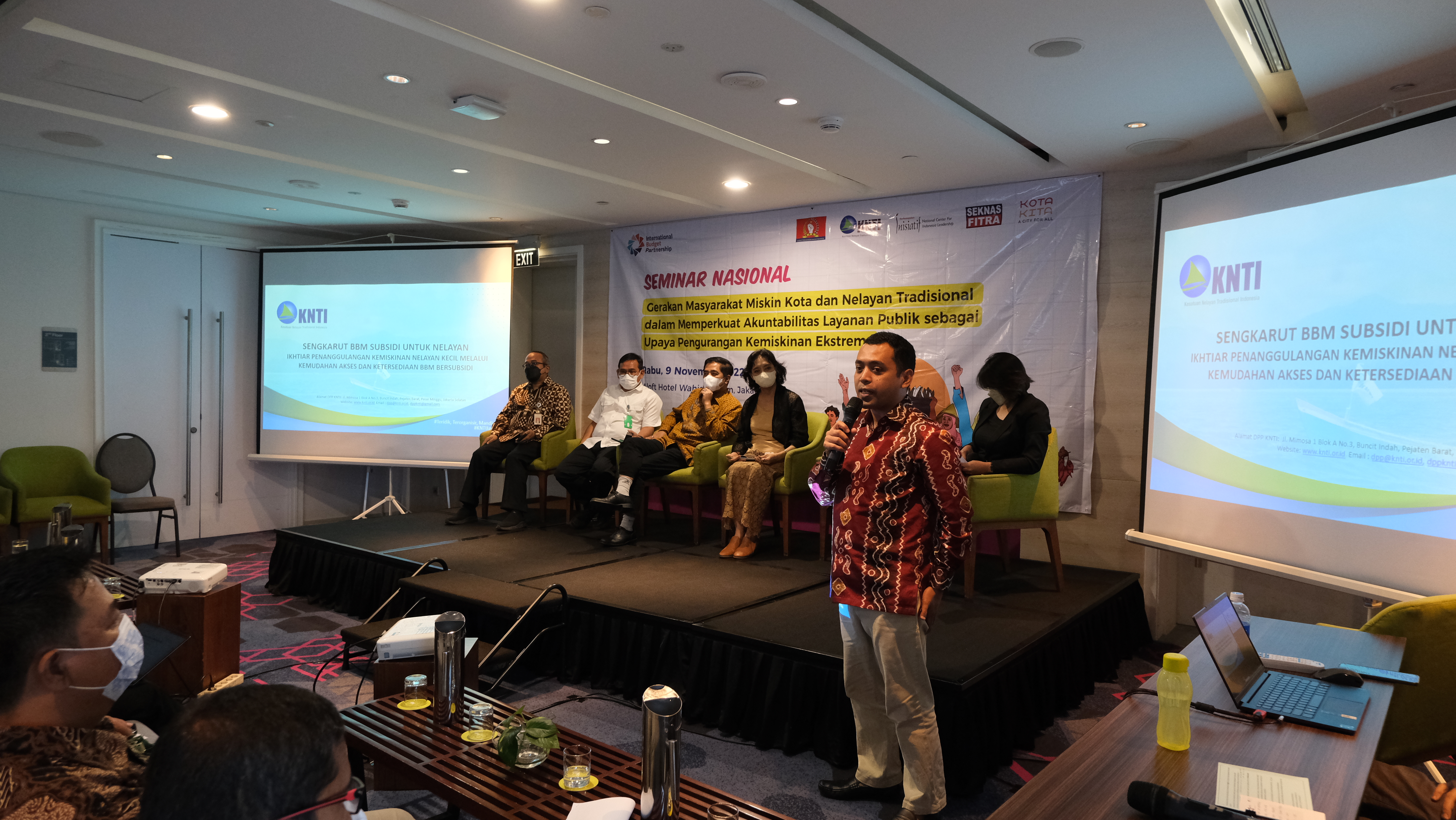 In the spirit of sharing insights and building momentum towards more vigorous civil society movements, the results and learning by SPRI's Dika and KNTI's Dani were discussed in a talk show by a panel consisting of academicians and government representatives. The talk show speakers included National Team for the Acceleration of Poverty Reduction (TNP2K) Executive Secretary/Deputy for Human Development Policy Support and Development Equity Dr. Ir. Suprayoga Hadi, M.S.P; Heri Kris Sritanto, Director of Social Security at the Ministry of Social Affairs' Directorate General of Directorate General of Social Protection and Security; Expert Staff at the Ministry of Maritime Affairs and Fisheries, Dr. Budi Sulistyo; Meuthia Ganie-Rochman, P.hd, a sociologist from the University of Indonesia; and Indonesia's House of Representatives member, Dr. TB. H. Ace Hasan Syadzily, M.Si.

Aside from the national seminar, partners of the SPARK program also participated in two-day learning and reflection sessions to consolidate the experiences and knowledge gained over the past three years of the program implementation. From 10 - 11 November 2022, SPRI and KNTI members gathered in a session facilitated by Kota Kita, Seknas FITRA, and Perkumpulan Inisiatif to discuss their challenges during the program, the knowledge gained, as well as the existing gaps that still need to be addressed. The participants also discussed and contributed feedback to a learning note document consisting of the learning and reflections from the program in Indonesia, which was initially produced by Kota Kita, as the Action Research Lead, and IBP Indonesia. The series of events on 9 - 11 November 2022 marked the conclusion of the SPARK program in Indonesia. Nevertheless, we remain hopeful that the achievements from the SPARK program might initiate a new momentum to support grassroots movements in Indonesia and further build awareness of the importance of citizen participation in reducing poverty and building a more equitable society for all.