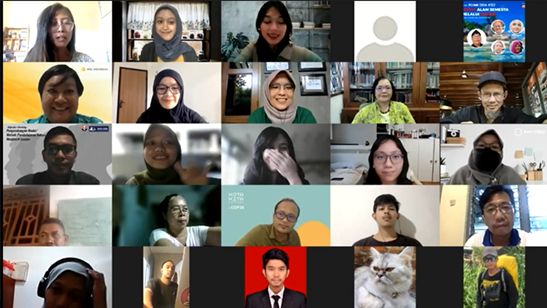 "Even though structural, bureaucracy and stigma are challenges for the vulnerable group such as women and people with disability in tackling climate change, this group also has a great potential - a 'power within' - to become agents that elevate the voices of others. Thus, the capacity of policymakers to address and recognize the needs of for must be prerequisite [in climate actions]."

With the increasing severity and complexity of climate change tension, more robust collaborations between think tanks, policymakers, and civil society organizations are critically needed to tackle the issue. In responding to that need, Kota Kita, alongside four fellow climate think tanks in Indonesia, is excited to share about the Think Climate Indonesia (TCI) Forum, which seeks to be one of the initiatives that work on fostering cross-sectoral conversations and collaboration about climate issues in Indonesia. The forum builds on the knowledge, expertise, and research findings of five partner organizations of the Think Climate Indonesia initiative: Yayasan Inobu, World Resources Institute (WRI) Indonesia, KEMITRAAN (Partnership for Governance Reform), Center for Regional and Information Studies (PATTIRO), and Yayasan Kota Kita. Think Climate Indonesia is a three-year program supported by International Development Research Center and Oak Foundation to enable local policy-research organizations (such as think tanks) in gathering the climate evidence that policy-makers need by increasing relevant data and evidence generation, deepening research capacity and strengthening policy engagement, and fostering collaboration.

The TCI forum hopes to cultivate a community of practice for civil society organizations, think tanks, policymakers, and relevant stakeholders working to advance effective climate actions in the country by sharing knowledge through newsletters and social media content and creating an open and public space for shared learnings through regular discussion such as the TCI Forum Dialogue series. If you are interested in following the initiative, sign up for the newsletter here.

We were excited to kick off the first TCI Forum Dialogue which began in April 2022, with a focus on gender perspectives and social inclusion within Indonesia's climate actions. We were thrilled to have nearly 100 people participate in the discussion, which included local think tanks and community organizations. As speakers for this TCI Forum Dialogue, we were joined by Cynthia Maharani, Gender Equity and Social Inclusion Program Lead at WRI Indonesia; Sulistyowati Irianto on behalf of Yayasan Inobu; and Nina Asterina, Urban Inclusivity Program Manager from Kota Kita, who shared about explored multiple aspects of the issues ranging from such as barriers and challenges faced by the vulnerable group, best practices and lessons learned of mitigation and adaptation strategies carried out by the marginalized group, to the necessary and strategy to bridge the knowledge gap to ensure the utilization of a gender perspective and social justice perspective in the discussion on climate actions discussion.

This session began with an interactive poll asking participants about the critical challenges to mainstreaming gender and social inclusion in climate change policy. The poll showed that strengthening the capacity of stakeholders related to GESI and involving the marginalized community in the decision-making was a major concern for most participants.

Kicking off the discussion, Cynthia from WRI Indonesia then explained the disparity faced by women in agriculture citing that, in most developing countries, women yield 60-80% of agricultural products yet only own 10–20% of agricultural land. She further noted that women living in rural areas are in jeopardy as climate change impacts such as limited access and control over resources and access to public spaces get worse. If these conditions are not addressed, women and other marginalized groups are likely to bear a more significant impact from climate change, mainly due to the limited risk coping options. Meanwhile, Sulistyowati from Inobu emphasized the importance of access to justice through four pillars — legal reform, climate change legal literacy, access to legal identity, and access to legal aid — to tackle poverty alleviation and climate change. With their best practice on encouraging participation, Kota Kita’s Nina shared several creative methods such as photovoice, journey mapping, and workshops using toy figures to co-design an inclusive public space that can be used for evacuation during the flood and fire together with residents in Banjarmasin, South Kalimantan. Nina further emphasized that a meaningful participatory approach is critical in enhancing the inclusion of vulnerable groups in climate actions because, at the end of the day, a climate-resilient city will be a city that is inclusive to the aspirations and needs of all of its citizens, regardless of age, gender, abilities, and other characteristics.

Kota Kita will be continuing to coordinate the TCI Forum activities in the coming months, together with fellow TCI Partners. There will be more dialogues and knowledge ahead to discuss issues such as climate justice, climate finance, and other critical topics in the effort to advance collective climate actions in Indonesia. Follow Kota Kita’s social media channels and the channels of WRI Indonesia, KEMITRAAN, PATTIRO, and Inobu to stay updated on TCI Forum activities!